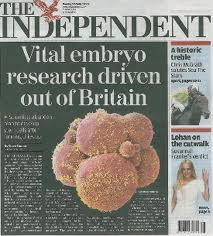 A fascinating article by Philippa Taylor on the official CMF Blog highlights an apparently straightforward question to government last week (20 July) which has exposed ‘a murky mix of confusion and secrecy from which the true facts and figures are difficult to extract’.

Lord Alton asked how many ‘cybrid’ embryos (cytoplasmic animal-human hybrid) have been generated with eggs from non-human species in total.

And yet the Independent ran several articles in 2009 stating that many more cybrid embryos were created – 278. That large number is naturally of concern, but also of concern is that the numbers don’t match the figure of 155 released last week.

The Government has avoided answering that question.

This incident is the latest in a saga surrounding a line of research that I once predicted would become a ‘farcical footnote in history’.

The tendency of the British media to sensationalise ‘advances’ in embryo stem cell research whilst ignoring or underplaying more promising ethical research using adult and umbilical stem cells is long-lived.

Ten years ago, after the 1999 Donaldson Report recommended allowing scientists to clone human embryos for stem cell research using somatic cell nuclear transfer (SCNT), CMF branded the research 'unethical and unnecessary' in a Triple Helix editorial and sounded a strong note of caution. We argued that the enthusiasm for this new technology was 'based more on political expediency than wise reflection' and warned that 'the prospect of revolutionary new treatments (would) undoubtedly entice investors to move funds away from other less glamorous, but potentially more promising avenues of research'.

Since 2000 we have witnessed the glorious failure of scientists in Britain and elsewhere to produce patient-specific stem cells from cloned human embryos. Subsequently, the limited availability and dangers of harvesting human eggs for research fuelled the shift to using cytoplasmic animal-human hybrids ('cybrids'). This was supported by a massive propaganda campaign in 2007-8 involving scientists, patient groups, and politicians, and led by Liberal Democrat MP Evan Harris with the willing co-operation of Times Science Correspondent Mark Henderson.

As a result, in an impassioned Observer article in May 2008, Prime Minister Gordon Brown welcomed animal-human hybrids as 'a profound opportunity to save and transform millions of lives' and expressed his commitment to this research as 'an inherently moral endeavour that can save and improve the lives of thousands and over time millions of people'. The measure was supported in a heavily whipped vote as part of the Human Fertilisation and Embryology Bill, now the HFE Act.

Ironically, before the new Act had even come into force, the news broke that stem cells from animal-human hybrids were seen as a poor investment and almost certainly wouldn't work. In January 2009, the two leading UK researchers granted licences for the work, Stephen Minger of Kings College London and Lyle Armstrong at Newcastle University Centre for Life, were denied funding by the Medical Research Council.

The British Medical Journal reported that the grant applications had been turned down because the reviewers considered that they were not competitive in the face of the lack of overall funding for medical research in the United Kingdom.

Minger himself admitted that he believed the distribution of research funding should be competitive, based on assessment of scientific value and cost, and noted that induced pluripotent stem cells are cheaper to set up than human-animal hybrid stem cell research. No one it seemed wanted to invest money in the new research, given the low likelihood of it ever yielding results and the emergence of cheaper ethical alternatives.

Journal Editor Sir Ian Wilmut, the British cloning pioneer involved in the 1996 creation of Dolly the sheep, concluded that 'production of patient-specific stem cells by this means would (now) be impracticable'.
Posted by Peter Saunders at 10:24