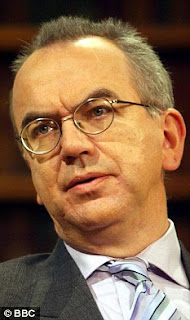 It’s not every day that you hear someone official say something profoundly politically incorrect but true and have it reported by the Times.

The Times front page today carried photographs of a whole host of well known celebrities and personalities who were adopted and ran an in depth feature on the issue highlighting a report commissioned from the new adoption czar Martin Narey.

You won’t be able to access it without a subscription (but for those who do the link is here). However I wasn’t surprised to see that Steve Doughty at the Daily Mail had picked up one of Narey’s statements and had run a whole article on it this evening with the provocative title ‘Pregnant women who don't want a child “should shun abortions and give babies up for adoption”’.

Women who are pregnant with unwanted babies should be advised to have the child and give it away for adoption, the Government’s new adoption czar said today.

They should be offered adoption as a routine ‘third option’ alongside abortion or struggling to raise the baby themselves, he said.

The call from former Barnardo’s chief Martin Narey (pictured) will pile fresh pressure on social workers to end three decades of hostility to adoption as a means of finding homes for children with troubled mothers.

Mr Narey’s plan would mean a return to the practices of the 1970s, when mothers who could not keep their children regularly offered them for adoption.

Since then, adoption has gone out of fashion with social workers, and the numbers of children and babies adopted from state care have dropped from over 20,000 a year to around 3,000.

Narey told the Times that adoption was ‘the golden option’ and said it was wrong to tell teenagers that they would make good mothers.

‘For six months we are all over her telling her how well she is doing and then she is on her own,’ he said. ‘What we are doing is cowardly.

'Adoption should be a third option to abortion or keeping the child. It is an attitude that must be allowed to grow. In the US mothers who give their children up for adoption believe they are giving them a great start.

‘Here it is viewed as a success if we talk them out of it.’

I noticed that Doughty didn’t quote exact adoption figures so I checked them out to see if he was right. He was. On the Office for National Statistics website historic adoption figures are readily available in an excel spreadsheet going back to 1974.

The overview page on adoption gives the historical background.

Longer term trends based on the date of entry in the Adopted Children Register show that the number of adoptions in England and Wales fell rapidly during the 1970s (there were 21,495 adoptions in 1971) and continued to fall steadily over the 1980s and 1990s.

In the 1970s, there was a rapid decline in the number of children available for adoption following the introduction of legal abortion in the Abortion Act 1967 and the implementation of the Children Act 1975. This latter Act gave the court power to treat an adoption application as an application for a custodianship order if the court considered this to be in the child’s best interests.

On 30 December 2005, the Adoption and Children Act 2002 was fully implemented. It replaced the Adoption Act 1976 and modernised the legal framework for adoption in England and Wales. The Act provides for an adoption order to be made in favour of single people, married couples and, for the first time, civil partners, same-sex couples and unmarried couples.

A more in depth examination of the data reveals the following:

The number of abortions on UK residents in 1968, the first full year after legalisation was 23,991. I can’t find an adoption number for that year but suspect it was considerably higher than 22,000..

So Narey is right about the numbers. One of the main reasons there are no babies to adopt is because they are being aborted. If some single women were to embrace adoption as a ‘golden third option’ there would indeed be many more babies to adopt, far fewer childless couples and less need for the emotionally and financially expensive option of IVF.

Narey is definitely on to something. But will the government have the courage to do anything about it? It will be interesting to see the response.
Posted by Peter Saunders at 15:28