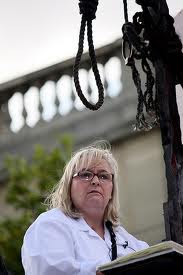 Disability rights campaigners dressed in white will stage a mock execution of a wheelchair user outside Parliament on Wednesday 27 July in protest against the dangerous drift toward all-out euthanasia.

The event, from 1pm in Old Palace Yard, will be led by Nikki Kenward of the campaign group Distant Voices, a woman who knows what it is like to be ‘locked in’ after contracting Guillian Barre Syndrome, a condition which left her totally paralysed for five months but the for ability to wink an eye. She has never regained the use of her legs.

The campaigners will wear surgical masks to signify the inability of many disabled or seriously-ill people to speak out for themselves and will process by drumbeat to a set of gallows where one wheelchair user will be doused in ‘blood’.

Mrs Kenward of Aston on Clun, Shropshire, is among those who fear that pressure is mounting on Parliament and in the courts to allow the killings of seriously sick, disabled or minimally conscious, but incapacitated patients.

She is particularly concerned about the plight of some 6,000 mentally-incapacitated patients in the British health care system.

A working party funded by the Royal College of Physicians is undertaking a review of their care which, according to the media, is likely to ‘lead to fundamental changes in medical practice’.

Professor Lynne Turner-Stokes, a brain injury expert at King’s College, London, and a member of the working party, has called for a ‘centrally-funded register of the large number of half-forgotten vegetative patients’. Prof Turner-Stokes told The Sunday Times: ‘We need to take a deep breath and consider whether doctors are striving to keep people alive in inappropriate circumstances.’

The demonstration outside Parliament also comes as the Court of Protection prepares to deliver its verdict on Case M, which involves an unprecedented application to starve and dehydrate a ‘minimally conscious’ brain-damaged woman to death even though she shows signs of awareness and can move her arm and put her tongue in and out.