Britain pays £129million a day interest on its national debt 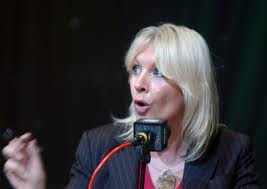 As we limp towards the possible US default on their national debt next Tuesday I see that Nadine Dorries MPs’ monthly Bedford News column this week is titled, ‘Time to act, before we become another Greece’

She is not talking about the US but about Britain.

No country can continue with that level of debt or continue to increase it, because if we do, in a very short space of time, we will be the next Greece. Not paying off our debt and getting it down to at least manage levels would eventually put the state in the position of not being able to pay its own bills.

Being in such a severe amount of debt means that the world bank, investors, the IMF and others begin to lose confidence in our ability to pay back and so they only then lend us money at a very high interest rate, which makes the situation far worse.’

‘Britain owes over £900 billion. It's real, it's ours… and we've got to pay it back. It's a truly frightening figure. Why is the world's sixth richest country so deeply in debt?

Right now, that debt is growing violently. The Government forecasts it will soar to an eye-watering £1.1 trillion by 2011.'

The Good Book says, ‘The rich rule over the poor, and the borrower is slave to the lender.’ (Proverbs 22:7)