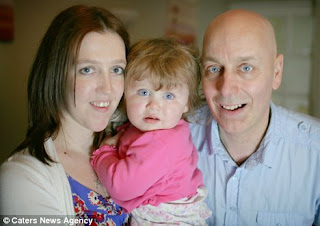 There is a deeply heart-warming story in the Daily Mail today titled, ‘Doctors told us to abort our little girl as she wouldn't survive birth - but our little fighter has flourished’

When an ultrasound scan showed ‘a massive tumour covering the entire left chamber of her heart that was restricting blood flow’ Charley-Marie Skinner's parents Heather and Andy were informed that there was little chance she would survive her birth and were advised to have an abortion.

They refused and were glad that they held their ground.

Now Charley-Marie (pictured) is nineteen months old and thriving – and if she does eventually deteriorate and require surgery the tumour may well be operable.

I have lost count of the number of times I have heard stories like this. Why is it that the medical profession responds in this knee-jerk fashion recommending abortion for disabilities we would make every effort to treat or correct in a baby after birth?

Why are not more parents given the opportunity, with proper support, to see their babies’ births through? Why is it that offering surgery, other treatment, or if relevant terminal care, to disabled, sick or dying babies seems no longer to be regarded as a serious option?

Why has our society instead reached the conclusion that these most vulnerable members of the human race, because they are disabled, sick or dying, have lives that are somehow not worth living? That they are, in other words, better off dead?

Recently released abortion statistics revealed that between 2002 and 2010 there were 17,983 terminations in Britain on the grounds that there was a ‘substantial risk’ that the babies would be ‘seriously handicapped’ — known as Ground E abortions. The overwhelming majority of these ‘abnormalities’ were compatible with life outside the womb.

A few years ago we carried in the CMF Student journal Nucleus, the story of a baby whose parents opted to love and care for her even though she had abnormalities that were not compatible with life outside the womb.

But they still went through with it and gave her all the love and care they could in the few hours their daughter Jennifer had with them.

The author Karen Palmer, a Christian psychiatrist, makes a powerful case for choosing to give birth to a disabled baby rather than having it aborted.

All pastors and prospective parents should read this, lest they are ever called to advise or cope with the arrival of a little one with extra special needs.

I leave the closing comments to Karen (but do please read her whole story):

Why did it happen? I don't believe that we can always know the reason God allows these things to happen. There's a spiritual battle going on and often the devil appears to have his way. What we do know is that God our loving Father, cushioned us and sustained us with his grace. It wasn't him who hurt us - he hurt with us.

After Jennifer's death, a steadfast friend said that when Jennifer arrived in heaven there would be great rejoicing and celebration because of all she achieved in her short life. I dream that when I arrive there people will say 'Ah! You're Jennifer's mother' and I'll be so proud!
Posted by Peter Saunders at 05:52