Merkel and Sarkozy ‘extend and pretend’ policies will fail because the real problem is not liquidity but solvency. Read the signs. 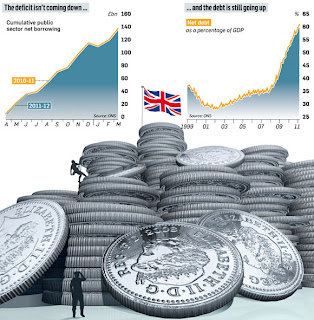 This blog is about 1,000 words long – but a picture is worth a thousand words and the key message is told by simply looking at the two pictures on this page (from the BBC and Sunday Times) It is not difficult to see what they are saying.

Whilst newspaper headlines have been dominated by the Murdoch hacking scandal, the Norwegian massacre and Amy Winehouse’s death economic issues have been pushed off the front pages and out of the public eye.

And the top story on the BBC is about the American’s failure to reach agreement on a new ceiling for the nation’s debt. Just over a week ago we read that ‘US trade deficit widens to more than $50bn in May’, the highest level in 31 months.

We read that the ‘the latest Greek bailout has solved its immediate problems, but doubts linger over how long the sticking plaster will hold’.

Last Thursday night, Europe’s leaders unveiled a deal that was designed to assure the markets that it had filled in that big, black hole in the Greek national finances — and contained the fears that were spreading across the eurozone.

A second bailout worth €109 billion (£96 billion) was agreed for the Greek economy, with private investors set to take a €37 billion ‘haircut’.

Wider reforms intended to address the market turmoil over the finances of Italy, Spain, Portugal and Ireland were also unveiled.

As details of the package started to leak out on Thursday, traders bought the political enthusiasm. By Friday morning, Europe’s main stock markets were rallying and the yields on Spanish and Italian bonds started to drop back from the levels of the past two weeks — which at times had peaked towards the 7% that economists flag as the danger point.

By Friday night, however, the rally had run out of steam. Once the markets picked apart the deal, they realised it was not the panacea the politicians had promised — it was a sticking plaster loosely covering a gaping wound in the side of the single currency.

Last weekend, Iain Dey, deputy business editor at the Sunday Times, in an article titled ‘Agenda: Let’s be clear — this is another financial crisis’ wrote:

Though many have missed it, the western world is balanced in the most precarious of positions once again. We should be terrified.

Unprecedented has become an overused word in the City in the past four years. The freeze in the global credit markets that began in the summer of 2007 was unprecedented, as was the subsequent collapse of Lehman Brothers, and the rescue of Royal Bank of Scotland and HBOS.

Every leg of the crisis has seen a whole new set of assumptions rubbished, another rulebook ripped up and a new paradigm of problems emerge.

This weekend the western world is balanced in the most precarious of positions once again.

Anyone who has been watching the news rather than the markets over the past few days could be forgiven for missing this, but the situation is broadly as follows.

•America will run out of money to pay its bills on August 2 unless its feuding politicians can agree a new deal to make its national debt pile even bigger.
•Europe is staring down the barrel of a seemingly unsolvable debt crisis, with Greece’s problems starting to infect Italy, Belgium and possibly even France.
•Global credit markets have started to seize up again, as they did four years ago. At times last week, the fear factor saw inter-bank lending grind to a virtual halt.
•Gold is soaring to new highs as investors search for a safe port in the storm. Prices are so high that gold mines last worked by Roman slaves 2,000 years ago are being reopened to exploration.

Unprecedented may be one word to describe this baffling confluence of events. Terrifying is another. Were it not for the fact that we’re all so jaded by the idea of countries going bust and banks running out of money, we’d be rather more concerned by all of this.

But I thought the most sense this morning was spoken by business editor Dominic O’Connell in an article I cannot find on the Sunday Times website titled ‘Greek bailout only postpones the inevitable’.

O’Connell says Merkel and Sarkozy’s plan is that by taking the heat off with a massive bailout the Greek economy will start to grow, eventually reaching a happy state where it can deal with its borrowings. But he calls this policy ‘extend and pretend’.

The real problem, he argues, is not liquidity buy insolvency. This latest bailout ducks the real issue – Greece and Ireland – and maybe other members of the eurozone – are bust. I would suggest that on the basis of the graphs on this page Britain and the US are too.

My advice? Live simply. Save wisely. Give generously. And get out of debt quickly cos the hard rain’s gonna fall!
Posted by Peter Saunders at 08:49