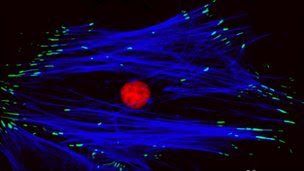 Three exciting news stories about stem cell therapies – none of which involves the destruction of human embryos – have been announced this month.

Stem cells have great promise in providing treatments for degenerative diseases like Parkinson’s, diabetes and various forms of cancer.

However, the British press, and especially the BBC, have an obsession with embryonic stem cells which means that they have a tendency to over report and overhype any development, however small, involving these entities, and to ignore or not notice the much greater advances already being made with research and treatments using stem cells which have been derived by ethical means (adult stem cells, umbilical cord stem cells and induced pluripotent stem cells)

This means that the British public is repeatedly hoodwinked into thinking that embryonic stem cells derived from the destruction of human embryos are the most promising source of new treatments and that Christians and prolifers are standing in the way of such advances and thereby threatening the lives of tens of thousands of sick people.

This narrative has been played over and over in Britain like a stuck record by science journalists spurred on by scientists concerned about their research grants, biotechnology companies looking for a quick profit, duped government ministers seeking votes and desperate but ill-informed patient interest groups grasping at straws in the hope of miracle cures.

I have always maintained that the truth will eventually out and this month three new developments, two of which you can even read about in the British media (because they involve British researchers), have been reported.

In the first, researchers in Glasgow and Southampton have found a better way of growing adult stem cells in the laboratory.

They have used a new plastic surface, covered with tiny pits, using a manufacturing process similar to that used to make Blu-ray discs. This, they claim, will help them to grow large amounts of adult stem cells and maintain them at the stem cell stage making them more adaptable for future therapies. In the picture above, you can see a stem cell making adhesions (shown in green) to the new ‘nano-patterned’ plastic surface.

The second study, reported by the BBC and Telegraph this week, is aimed at investigating whether stem cells can be safely used to treat multiple sclerosis (MS).

Researchers will collect stem cells from the bone marrow of patients, grow them in the laboratory and then re-inject them into their blood. The stem cells will make their way to the brain where it is hoped that they will repair the damage caused by MS. The trial, involving up to 150 patients across Europe, is due to start later this year.

Three million people are thought to be affected with MS worldwide and up to 100,000 in the UK. The condition is caused by the body's own immune system attacking and damaging a substance called myelin, which provides a protective covering to nerve cells in the brain and elsewhere. The therapy is aimed at regenerating damaged myelin.

The third, and potentially most exciting development, reported in the Hindu and in the American outlet Top News, has amazingly not yet apparently been noticed by the British press (perhaps because it did not happen in Britain).

German researchers have cured serious liver disease in mice using induced pluripotent stem (iPS) cells in an important first that shows promise for use in people with liver metabolism ailments.

The researchers from Muenster and Hanover took skin cells from the mice, returned them to an embryonic state and subsequently corrected a gene defect in the cells. The cells were then used to create healthy mice.

‘For the first time, a living organism has been cured of an illness using iPS cells repaired using genetic methods,’ researcher Tobias Cantz told the German Press Agency dpa. ‘We have de-programmed the skin cells of mice with liver disease into iPS cells and subsequently corrected the gene defect that caused the liver disease.’

Cantz’s team from the Max Planck Institute for molecular biomedicine in Muenster and their colleagues at the Hanover—based Institute for Cell and Molecular Pathology published their results in the scientific magazine PLoS Biology.

Both the abstract and full text of the article are available on line.

They noted that research using iPS cells is broadly seen as ethically unproblematic, as embryos are not needed to provide a source for them.

I have reported previously about the wonderful developments that have been made using induced pluripotent stem cells (IPs), cells that have all the properties of embryonic stem cells, but which can be produced in an ethical way without destroying embryos.

It is hoped that clinical trials will soon be able to begin using these cells in humans.

Good research is ethical research. The end of saving life must never be used to justify unethical means. These new developments show that with patience and ingenuity promising treatments using stem cells can be derived that do not involve the destruction of early human life.
Posted by Peter Saunders at 23:47