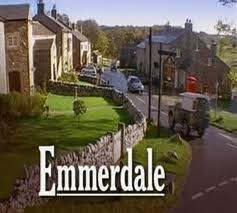 I am not an Emmerdale fan but I was interested to see the way the Soap is developing the story following the assisted suicide of a character with spinal injury.

However it does appear now to be taking a more realistic view about the huge ramifications for the lives and relationships of those left behind after an assisted suicide.

In a recent report in the Daily Mirror, ‘Emmerdale: Aaron and Hazel struggle to come to terms with Jackson's assisted suicide’, some of the ensuing chaos is described.

Almost five weeks since the assisted suicide of tetraplegic Jackson, both his boyfriend Aaron and mum Hazel are struggling to come to terms with what they have done.

While Aaron has to deal with Jackson’s furious dad Jerry grabbing him yet again, he also has the worry of his murder trial looming. His only hope is getting an expensive top barrister, but he refuses to allow mum Chas to accept a loan from her former lover Carl.

There are also concerns for grieving Hazel. With another moving performance by Pauline Quirke, she has turned her home into a shrine for her son, with his clothes, photos and CDs piled up. Yes, she has regrets.

‘And I can’t help wishing that he’d given himself a chance,’ Hazel tells shocked Chas. ‘And I get so angry… at what he did to himself… what he made us do… It’s such a waste.’ Too true.

Pauline Quirke, the actress at the centre of the story, talked recently about her own personal reaction: ‘It’s a very emotive subject. Danny [who plays Aaron] came to my flat in Leeds and we watched the scenes together, and I feel that it was handled very well. It was grim and that’s exactly how it was meant to be.’

The BBC could take some lessons from ITV. In the last three years the national broadcaster has shown no fewer than five docudramas and documentaries that have glamorized assisted suicide or otherwise shown it in a positive light – and not one taking the opposite view.
Posted by Peter Saunders at 14:50