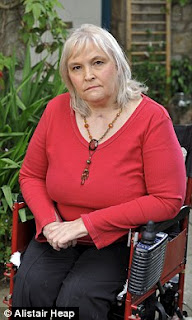 Today Nikki Kenward, who was left disabled after a partial recovery from paralysis caused by Gullain Barre syndrome, will stage a protest outside parliament about the dangers that a changing the law to allow assisted suicide or euthanasia would pose to those with serious disability.

Her own inspiring personal story is told in the Daily Mail today and well worth a read.

Kenward (pictured) wants particularly to draw attention to Ms M, a woman in her early 50s in minimally conscious state, whose case is currently being heard in the Court of Protection. M’s sister and partner wish to have her nutrition and hydration withdrawn so that she can be starved and dehydrated to death.

It has long been a ploy of the pro-euthanasia movement that allowing the death by dehydration of people who are not imminently dying will make lethal injections for euthanasia much easier for society to accept. It is in other words part of a softening up exercise. So there is understandingly a lot of public interest in this landmark case which has the potential of setting very dangerous legal precedents. The judge visited M on Monday this week and expert witnesses will be giving evidence today.

It is a popular misconception that most people with serious disability or terminal disease wish to have their lives prematurely ended. But in fact this is true only of a very small vocal minority to whom the BBC in particular, that 'cheerleader for euthanasia', has given an international platform. This has had the effect of swaying public opinion and fuelling suicide contagion.

But more recently there has been a steady trickle of ‘good news’ stories in the print media of people overcoming adversity, of which Nikki Kenward’s is the latest. I have also recently blogged about other examples – amongst them are:

1.Martin Pistorius, a South African man who was imprisoned by locked in syndrome for ten years but is now married and running a successful computer company.

2.Alistair Banks, the incurable optimist, – an inspiring story of courage in the face of motor neurone disease.

3.Pauline Thiele, who learnt to love her unborn baby son Liam, who had Edwards syndrome, even though she knew he could not survive .

4.Jean-Dominique Bauby, the French editor of Elle magazine, who suffered a severe stroke, from which he never recovered, and yet wrote, the autobiographical ‘Diving Bell and the Butterfly’ which was ‘dictated’ letter by letter and has been made into a major feature film.

5.Little Charley-Marie Skinner, a baby born with a heart tumour, whose parents were advised to have an abortion. She is now thriving at 19 months.

6.Graham Miles, the pensioner who told how he beat ‘locked in syndrome’ after suffering a massive stroke.

7.Matt Hampson, the Leicester rugby player who suffered tetraplegia in a collapsed scrum and now is an inspirational speaker running a charity to help those ‘less fortunate than himself’.

8. Gary Parkinson, who has locked-in syndrome, and his now acting as a scout for his old football club Middlesborough.

Proponents of assisted suicide, who have expressed a strong persistent wish to be ‘helped to die’ by their own hands, have been granted an international platform by the BBC, to tell their stories in great detail and without adequate cross-examination, creating the false impression that the small minority they constitute are somehow representative of all people facing suffering or death.

Cases are often highlighted in painstaking detail featuring long personal interviews and often with substantial extraneous information about the individual’s personal life. Contrary views are either not expressed, or are at best relegated to single sentence reactionary soundbites. Many of the cases involved have become household names in the UK.

It is therefore gratifying to see news outlets, other than the BBC, giving column inches to cases like those I have outlined above. It is essential that people here this alternative perspective on suffering and assisted suicide.

I recently noted how the soap Emmerdale, had more realistically depicted the devastating effect on those left behind following the assisted suicide of one of its key characters, even though it had previously been much less accurate in depicting what life with paralysis involves for most people.

These recent trends are encouraging. Stories of courage in the face of profound disability or chronic or terminal disease and accounts of how people found strength to overcome adversity, or even to cope with a life situation which they would never have chosen but have no power to change, need to be heard.

Is it too much to ask that some of them might be given an international platform by the BBC? We will have to wait and see.
Posted by Peter Saunders at 01:32